What is happening
Trivia 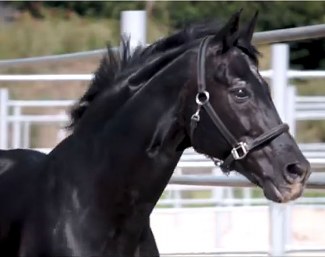 Yesterday Stallion Station Schockemohle posted this video of 27-year old Sandro Hit in the paddock in honour of "International Day of Friendship" to celebrate the friendship between the stallion and his groom Barbara.

Bred by Reinhold Harder, Sandro Hit is by Sandro Song out of Loretta (by Ramino x Welt As x Luciano).

He was licensed at the 1995 Oldenburg Stallion Licensing in Oldenburg and only did his 100-day stallion performance test two years later in 1997 in Medingen. He scored 115.72 points for dressage and 82.17 points for show jumping, to finish with an index of 99.80 points (16th out of 33 participating stallions).

Under Ulf Möller he won the inaugural World Young Horse Championships in 1999 and the Bundeschampionate that same year. Sandro Hit competed at one more show, the 2000 Zwolle International Stallion Show after which he was focused fully on breeding. In 2011 he retired from appearing in stallion shows.

Sandro Hit has 190 (!!) sons licensed for breeding in Germany and 293 daughters awarded with the State Premium. 206 of his offspring are competing at S-level in Germany.

Related Links
Sandro Hit: Example of the Perfect Dressage Horse
Dr. Ulf Möller and Sandro Hit Retire from the Show Scene
Sandro Hit Euphoria At One of the Best Oldenburg Stallion Licensings Ever