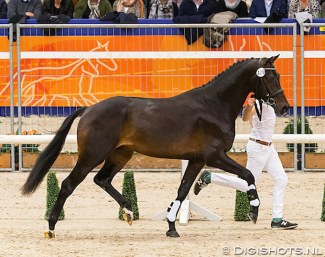 Indigo TC is by Dream Boy out of Trendy (by Kennedy x Highline). He is listed as bred by Tim Coomans.

The black was presented by horse dealer Tim Coomans at the pre-selection days for the 2016 KWPN Stallion Licensing but stranded in the second phase. Indigo's full brother Kevin, however, got licensed and performance tested in 2018. Kevin is bred by H. Melis though.

Later that year Indigo was offered for sale in the 2016 Excellent Dressage Sales, where he achieved a knock down price of 33,000 euro, but stayed in Holland.

Indigo moved to Eugene Reesink's dealer's yard as a sales horse. British agents scouted him there in the autumn of 2016 for Abu Dhabi based Sheikha Fatima Bint Hazza Bin Zayed Al Nahyan.

She purchased the stallion and moved him to her Al Shira'aa Stables in Great Britain, where he came under the care of Kate Moisson and rider Tom O'Brien.

O'Brien competed the stallion in some novice classes at local shows in the U.K. in 2017 but since then the stallion has stayed under the radar.

Al Shira'aa's focus has gradually shifted more towards show jumping and the dressage part of their business has been massively downsized. Rider Tom O'Brien left the yard in the spring of 2019 and Indigo was sent to Germany to be sold.

Langehanenberg announced on Instagram that she has the ride on the horse, but did not disclose any further details about the new partnership.