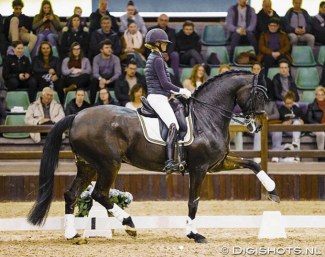 After a two year absence from the public eye, Grand Prix horse Dabanos d'O4, internationally competed by Jeannette Haazen, has returned to the spotlight.

Dabanos d'O4 was bred in Belgium by Victor Vansant and owned by Denise van Dingenen.

The talented dark bay made his international show debut under Van Dingenen's grand daughter, Ona de Wagenaere, at the 2012 CDI Hagen at small tour level. Three months later they moved up to Grand Prix level. The pair competed at GP level through 2015.

In 2016 Ona's trainer, the Belgian based Dutch professional Jeannette Haazen, took over the ride on the highly sensitive gelding, whose nerves often got the better of him. Under Haazen the horse's scores soared to the low seventies, yet with the occasional drop due to tension.

In May 2018 the owner made the surprising decision to pull the horse away from Haazen and Dabanos disappeared from the show scene entirely.

Dabanos D'O4 has now returned to the arena under Alexa Fairchild, an American born Belgian who is based in Brussels and trains with Wim Verwimp.

Fairchild has been a member of the Belgian team at no less than 9 (!!) European Championships at pony, junior and young riders level. Most recently she has been competing in the Under 25 division with the 14-year old Hanoverian mare Romy (by Rousseau x Rotspon). Their last start was the CDI Leudelange in July 2019.

The 25-year old Alexa has moved to the senior division in 2020 and made her show debut on Dabanos d'O4 at the national show in Dentergem in January, where she scored 66%, her first qualification score of a required two at national level before being eligible to compete internationally. In February the only two national shows were cancelled for organizational or weather reasons and in March the corona shutdown came.

The new pair also appeared in public, riding in a clinic with Tineke Bartels at the 2020 CDI Lier on 1 March 2020.