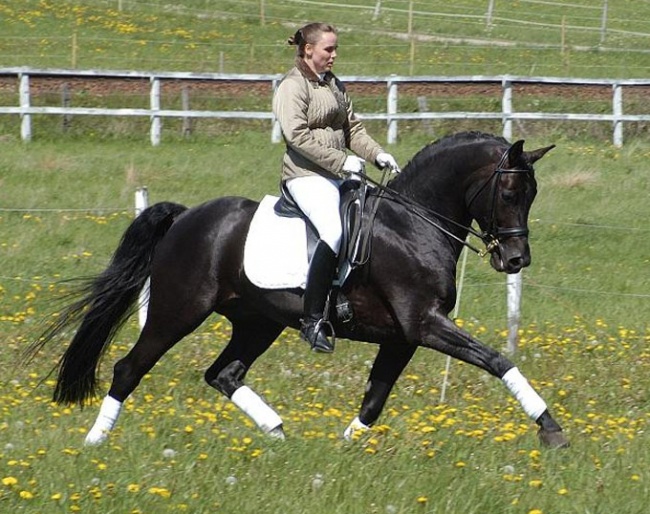 The U.S. based Oldenburg licensed stallion Rubignon has passed away at age 26.

Rubignon was by Rubinstein out of Una Donna (by Donnerhall x Pik Solo x Samun xx. He was bred by Sibylle Wiemer.

The black stallion was first licensed for breeding at the Hessian Stallion Licensing in Alsfeld in 1996, and later approved by the Swedish warmblood, Hanoverian and Oldenburg society (GOV).

Swedish based American Colette Ross Prince purchased Rubignon as a youngster and stood him up for stud in Sweden.

Rubignon also had a career in sport. He was first competed by Swede Orn Arnarsson and in 2008 Ross-Prince rode him at one international at Grand Prix level, the 2008 CDI Norrkoping. At national level he garnered several wins and placings in 2008 and 2009.

Colette Ross-Prince sold Rubignon to American Edgar Schutte when she became pregnant with her first child a decade ago.

The black stallion moved to California, where he stood up for stud.

"Rubignon enjoyed incredible longevity in his breeding career beginning when he was a young stallion with a full book ever since," said Schutte. "His unique sweet character combined with his talent will be missed by many, especially at home. Rubignon’s many incredible offspring will no doubt carry on his legacy."