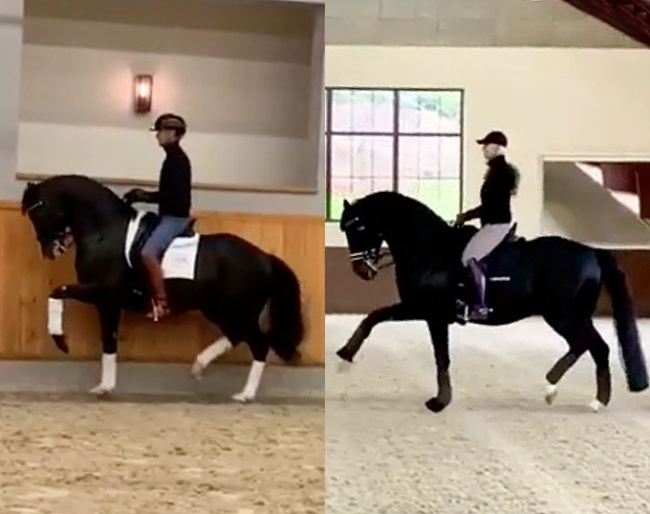 With the end of the year approaching, Ann-Kathrin Linsenhoff and Edward Gal released a treat for their fans with short video clips of their black stallions: Totilas and Total U.S.

Linsenhoff purchased the sports rights to Totilas in 2010 after Paul Schockemöhle secured the Dutch warmblood stallion from Cees Visser for a rumoured 11.2 million euro. Her step son Matthias Rath competed the Gribaldi x Glendale offspring on the German team at the 2011 European Championships in Rotterdam and the 2015 European Dressage Championships in Aachen.

The latter event was the last public show of the stallion, who was withdrawn after the Grand Prix, for which they won team bronze. Totilas was retired at age 15 due to fitness issues.

The stallion has spent his retirement breeding for Paul Schockemöhle and staying at Linsenhoff's beautiful Schafhof. Right before Christmas Ann Kathrin released a clip of her riding:

In a recent interview with Dutch newspaper NRC, Edward Gal stated that the 7-year old Oldenburg stallion Total U.S. (by Totilas x Sir Donnerhall) could potentially be better than Totilas, which earned Gal world records as well as the 2009 European Champion and 2010 World Champion's title.

Total U.S. has only done one competition under Gal, winning the 2018 Pavo Cup Finals for 6-year olds. He has not appeared at competitions since then but has been shown in a few exhibition events and stallion shows.