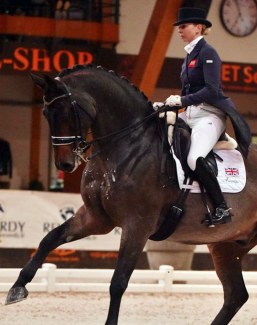 British riders have returned home from a highly successful trip to Le Mans CDI in France on 17 – 20 October 2019, where Louise Bell and Gareth Hughes were on winning form in the big and small tour division.

In the CDI3* Big Tour, Louise and Into the Blue  cracked the 70% barrier for second in a close fought Grand Prix contest behind the Netherlands’ Thamar Zweistra and Hexagon’s Double Dutch. Whilst Gareth and KK Dominant took third for owner Claudine Kroll - the top three incredibly all within a percent of each other.

Louise and ‘Dynamo’ later claimed the Grand Prix Freestyle, despite the rider battling a bout of flu, ahead of the Netherlands’ Lucie Louws and Evito in second, and Gareth and KK Dominant third. The winning pair’s freestyle, which takes you on a journey from Sweet Home Alabama, to The Greatest Showman and Despacito, was awarded 75.16%.

“So proud of Dynamo and actually myself for holding in my flu for seven or so minutes. It’s been a tough but brilliant show here at Le Mans CDI3*,” said Louise.

Louise is on the crest of a wave this year with the bay roan Into the Blue, a horse who amusingly likes to express himself with squeals of happiness during his work. On the hallowed grounds of Aachen in July, they achieved a 70% Grand Prix, followed later that month with a Grand Prix and Special double win in the CDI3* at Hickstead.

In the Small Tour, Gareth Hughes was unbeatable with young protégé Sintano Van Hof Olympia, whom he co-owns with Judy Firmston-Williams. Gareth and the nine year old Sandra Hit x Silvano gelding  claimed the Prix St Georges with 73.82%, the Inter I with 73.17%, followed by a winning Inter I Freestyle, complemented by the sounds of David Garrett’s Dangerous and an orchestral adaptation of 90s dance hit, Infinity, for 76-plus percent.

Katie Bailey impressed also with a podium place in the Inter I Freestyle aboard Hannah Dovey’s Eagle Nouvelle, scoring 73.46%.

“Sintano Van Hof Olympia finishes the weekend off in style by winning the Inter I Freestyle in Le Mans,” said Gareth on Facebook. “What a year he has had. First year at Small Tour and he has won seven international titles and is the Inter I National Champion. We are very proud to own him in partnership with Judy Firmston-Williams.”

Britain’s U21 riders made their mark in Le Mans, with Junior rider Jessica McConkey and Pony rider Annabella Pidgley each winning a class in their respective category.

Jessica won the Junior Team Test on 69.54% with her 2019 FEI Junior European Championship partner, Lady Gaga (Quaterback x Solos Landwind), going on to claim third in the Individual and second in the Freestyle on 70% behind the Netherlands’ Lara Van Nek.

“Millie is on fire,” said Jessica on Saturday. “We got another canter round the prize giving after our Individual test where we placed third! We achieved a much more powerful connection today and a really harmonious partnership in the test, so [I] could not be more happy with my mare.”

Annabella and Cognac IX, the striking FS Chambertin-sired palomino owned by Sarah Pidgley, showed super work for 71.14% and second in the Pony Team Test behind Germany’s Lana-Pinou Baumgürtel and Zinq Massimiliano FH. The British pairing however held their consistency for a 71.89% for an exciting victory in the Individual. Annabella and Cognac impressed in Poland this year at the FEI Pony European Championships and continue to build on their form.

Britain’s sole representative in the Medium Tour, Lisa Marriott, did herself proud to rise up the ranks over the course of the show. In the Intermediate B, which was won by British-based Fin, Mikaela Soratie with Hot Casanova (68.12%), she and Valucio DH Z scored 66.52% for seventh rising to second in the Inter II on 68.55%. This pleasing score put them behind the home nation’s Morgan Barbançon and Black Pearl who won by a nose.