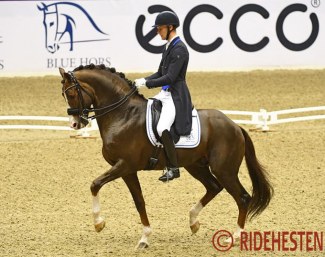 Daniel Bachmann Andersen and breeding stallion Blue Hors Don Olymbrio secured the victory in the CDI 3* tour held during the World Cup qualifier in Herning, Denmark, on 18 - 20 October 2019.  Helgstrand Dressage Grand Prix in Herning, where he and Betina Jæger sat in the top positions.

Daniel and Don O were a league of their own beating all competition with a massive lead in points to the second placed pair. In the Grand Prix they won the class with 78.043%, receiving nines for their passage and passage-piaffe transitions as well as 9 for the 2-tempi changes, and rider's seat. In the Special they upped the ante even more and finished on 79.702%, no less than 7% ahead of number two.

"I am very happy with Don O’s development over the last few months," Bachmann told Eurodressage. "He has gained more strength and he lets me ride more with my seat. He is much more focused throughout the entire test and it feels more and more like I can “just” fine tune my adds in there."

With Don Olymbrio outshining his stall mate Blue Hors Zack, Eurodressage wondered if the liver chestnut is Daniel's number one choice for Tokyo, or will Zepter be back in the running?

"I consider all the horses as my Tokio hopes," Daniel quipped. "As you never now what can happen. Zepter is fully recovered from a small injury at the beginning of the year and as the season was already kind of over when he got back I decided to give him extra long time to get very slowly back. We have planned to ride at Bluehors CDI 3* next month."

The CDI-W Herning was the come back show for Danish WEG team pair Betina Jaeger and Belstaff. After the 2018 World Equestrian Games in Tryon, Belstaff sold to Korean Dong Seon Kim. The Hanoverian by Brentano II x De Niro disappeared from the show scene for a year. The horse moved to Hubertus Schmidt's yard Fleyenhof for training and was then with Kim at his yard St. Ludwig in Wegberg. In July 2019 he returned to Helgstrand Dressage and got back in training with Jaeger, as Kim left Germany for his home country Korea. Betina and Belstaff placed second in the Grand Prix with 72.631% and they were third in the Special with 70.511%.

"I’m really happy with my Grand Prix test," Betina told Eurodressage. "He wanted to do his best. In the GP Special we had a few mistakes/misunderstanding, especially the half pass in trot was expensive. But the judges like him because he is such an impressive horse, and they give him nice points when we do it correctly. I hope that we can do some more shows together. He is so nice to ride. I always had this big wish that he was mine."

Austrian Victoria Max-Theurer has a new horse to compete, the 9-year old Westfalian stallion Rockabilly (by Rock Forever x Ehrentusch). She made her international debut on the stallion at the CDI Nice two weeks ago and in Herning they were sixth in the Grand Priw with 69.065% and second in the Special with 72.745%. Rockabilly was approved at the 2012 Westfalian Stallion Licensing, but did not do his HLP test. He was first started in Germany by Michael Potthink in 2014, but one year later Kira Laura Soddermann took over the ride through 2018. At the beginning of 2019 Victoria's life partner Stefan Lehfellner competed the stallion at the CDI Munich in June 2019 in the Inter II and Grand Prix, before Victoria took on the ride.