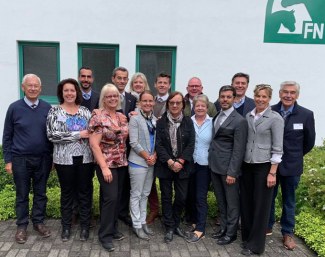 The FEI judging course and exam were carried out by 5* judges Dieter Schüle and Ghislain Fouarge.

The course and exam were held over three days during the 2019 Bundeschampionate - the German Young Horse Championships at the DOKR/FN headquarters in Warendorf.

The course started on Saturday 7 September 2019 with a theoretical session and videos on the principles of judging young horses, followed by the group watching the 6-year old Dressage Horse Finals. All judges wore a headset and each of them had to comment on one horse through the microphone and was assessed on their commentary. On Sunday 8 September a similar format was followed with the 5-year old Dressage Horse Finals.

On Monday 9 September the German FN had invited eight horses for judging. All candidates had to judge the 8 horses, followed by a discussion of their notes in the afternoon and an oral exam.

Thirteen judges passed the FEI young horse judging course and are now eligible to judge the CDI-YH classes. They are: