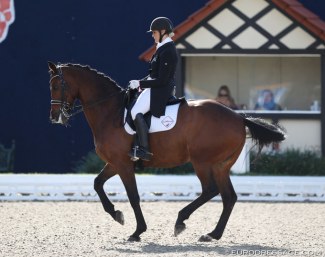 The FEI has given the 2019 CDI Exloo on 24 - 27 October 2019 the status of final Tokyo Olympic dressage team qualifier for Group F.

It will be the last opportunity for a team to qualify for the Olympic Games in Tokyo, Japan, which take place 25 - 29 July 2020.

In practice, for dressage, this means that riders from South Africa, Palestine, Iran, and Morocco can be competing in Exloo as the other countries have no international Grand Prix riders in Europe.

South Africa is the only country with a potential team of three (Tanya Seymour, Laurienne Dittman, Gretha Ferreira, Nicole Smith).

Palestine has only two riders competing at Grand Prix level: Russian born Diane al Shaer who has been actively showing Unazalee de Massa this show season, and German born Christian Zimmermann (né Brühe), who showed only at one CDI in 2019, in Ebreichsdorf last April, but he is entered for the CDI Waregem next week.

For Morocco only one Grand Prix rider has been competing internationally this year, the Portuguese based Ismael Jilaou. He competed What a Feeling this spring at the CDI's in Sevilla, Cascais, Abrantes, Alter do Chao and Lipica. The latter show in May was his last start this year.

Iran has only one Grand Prix rider, the British based Litta Soheila Sohi. She has shown Air FK at the CDI's in Sevilla and Cascais and withdrew her horse from Saumur this spring.