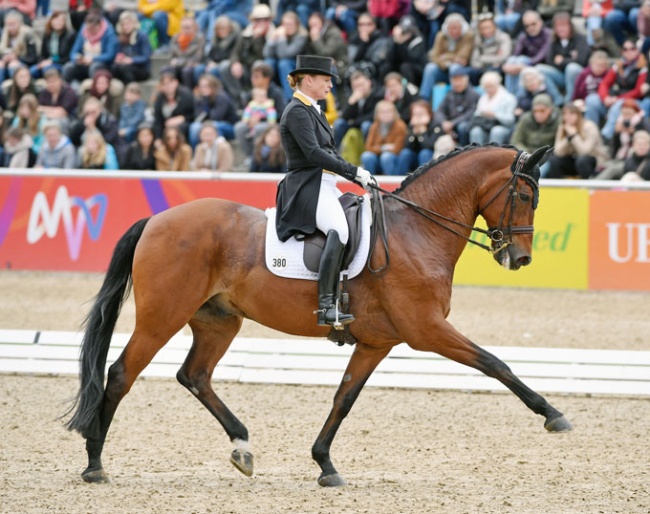 Isabell Werth is riding the 17-year old Hanoverian gelding Don Johnson in his last year in international competition sport. Werth announced her retirement plans for the horse at the CDI Mannheim last weekend.

Don Johnson is by Don Frederico out of Werona (by Warkant) and bred by UIrike Meyer. He is owned by Werth's long-time sponsor Madeleine Winter-Schulze.

The bay gelding was first competed as a youngster in the riding horse tests by Matthias Klatt in 2005. He made his show debut under Werth at a local show in Hunxe at L-level in April 2008 and moved to small tour level in 2009.

The pair's international show debut was at small tour at the 2010 CDI Lingen, followed by Fritzens and Aachen. In September 2010 he did his first national Grand Prix class and two months later made his CDI Grand Prix debut at Munich Indoor.

Don Johnson is known for his very cheeky behaviour and frolicky bucking in the warm up. This has not always been easy on the image of highly celebrated Olympic rider, who experienced social media backlash when unclassical photos were taken in the warm up with Johnny acting up. The rider's strength was always that no matter how rebellious Don Johnson was in the warm up, Werth was always able to shift the horse into the right gear in the competition arena for test riding.

While Don Johnson continuously produced big scores, he never became Werth's individual medal winning horse. Nonetheless, Don Johnson certainly contributed to Germany's team silver at the 2013 European Championships in Herning (individually they didn't make it to the Kur) and team bronze at the 2015 European Championships in Aachen (fourth in the Kur finals). They were also fifth at the 2013 World Cup Finals in Gothenburg.

"In the warm up ring Johnny provoked me and pulled me by the hair with his bucking," a smiling Werth told Dressursport Deutschland. "But in the test he was really nice. I like to call him my rising hope, he's only 17. He will do two or three more nice shows and then he'll be able to enjoy his retirement with Satchmo at home."

Interesting fact, Don Johnson is listed in the FN database as born in 2002, while in the FEI database he's listed as born on 4 December 2001. At the time the German FN counted December born foals into the next year.