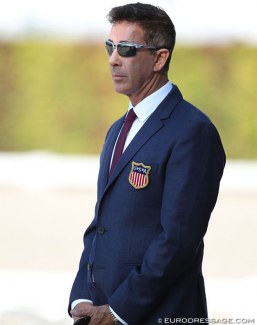 Four-time Olympic medalist Robert Dover (USA) is an internationally acclaimed athlete, coach, and trainer spans several decades and includes holding role of Technical Advisor for the Canadian Dressage Team from 2009 to 2011, as well as a lengthy stint as the U.S. Dressage Technical Advisor and Chef d’Équipe from 2013 to 2018.

Dover, who will be coaching EC National Team Program dressage athletes alongside the Symposium sessions, is celebrated worldwide for his expertise, enthusiasm, and skilful ability to provide accessible and valuable advice to riders at every level.

“I am very excited to be seeing my Canadian friends again during the EC Dressage Levy Performance Advantage Symposium,” said Dover. “My goal is always to have people going home feeling they have learned something new and had a lot of fun, whether as a rider or an auditor. In my heart, though, I truly hope that each person there will have an ‘Aha!’ moment that might actually change their lives on or even off their horse.”

In addition to Dover, the Symposium will offer educational sessions tailored to Canadian dressage enthusiasts at no cost to participants who contributed to the 2019 Dressage Levy. Attendance hours will also count towards EC coaching certification maintenance.