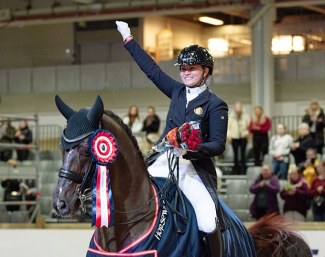 Danish base Norwegian Ellen Birgitte Farbrot and the 14-year old Oldenburg bred Tailormade Red Rebel shone in the small tour at the 2019 CDI  Lillestrom in Norway, on 22 - 24 February 2019.

Previously known as the Arctic Equestrian Games hosted in Vestfold, Norway, the event relocated to Lillestrom and changed name into Norwegian Horse Festival this year.

After placing second in the Prix St Georges with 70.176%, Farbrot and Red Rebel (by Romanov x Donnerhall) were in commend in the Intermediaire I and Intermediaire I Kur to Music. They scored winning marks of 71.235% and 74.560% and twice relegated the PSG winner, Siril Helljesen and the 10-year old Danish bred Zarina VG (by Zack x Caletto III) to a second place.

It was just amazing," a thrilled Farbrot told Eurodressage. "He gave me what I asked, and we had some really good days in Lillestrøm! He got better each day, and I expect him to develop even more in the ring, as we get some more show experience together."

Farbrot has been competing Red Rebel sparingly at international shows with just one start in 2017 in Aalborg and one in 2018 in Randbol.

"I've had Tailormade Red Rebel in my stables since 2016. This is the third international show I entered him in," she explained. "He has made a huge development during the last six months, so I was really looking forward to the show. It was his first indoor show in this scale, but he loves the spotlight, and took the audience by storm."

Farbrot is a stable manager at Stud Følle Strandgaard just north of Aarhus in Denmark, where they house 50 horses from foals to high performance sport horses. With the Norwegian company Tailormade as her main owner, the future is bright as Ellen Birgitte has plenty of horses to ride. They also stand breeding stallions Temptation and Sarkozy at the yard, but aside from one CDI two years ago for Temptation neither have built up any international mileage.

"At the moment I have three Grand Prix horses and eight small tour horses, plus a lot of really promising young horses," she said. "Tailormade is unique because they let me develop and keep the really good ones. Hopefully I have some nice prospects for the next Europeans and for 2024.

"He is close to ready for Grand Prix and has done some local Intermediate II with great results," she added.