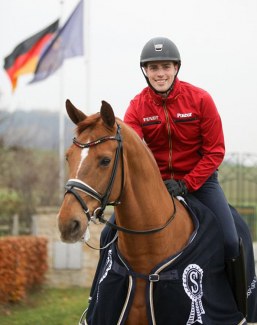 Starting with a win in the Louisdor Prize qualifier at Horses & Dreams in Hagen a.T.W. in 2017, then fifth place in the Louisdor Prize Final that year, a successful Nations Cup debut for Germany at Rotterdam in 2018 and most recently their first FEI World Cup start and win in Zakrzów, Poland — Frederic Wandres and the 11-year-old Hanoverian gelding Duke of Britain, owned by Hof Kasselmann, have really made their mark in the dressage arena in the past two seasons.

It doesn’t get much better than that. A view shared by the members of the German Olympic Equestrian Committee (DOKR), who have included the pair into the perspective squad (formerly B-squad) for 2019. The perspective squad is made up of riders and horses that have shown recent success and possess the potential to progress to the Olympic squad and possible participation at World Equestrian Games or Olympic Games. wa

Frederic Wandres and the Dimaggio-Rubinstein son have been a combination for about two years, first starting in national Prix St Georges events before working their way up to Grand Prix level. Hof Kasselmann is often referred to as center of competence for dressage sport, and the success of Kasselmann rider Wandres and the Kasselmann-owned Duke of Britain shows just how successful the Kasselmann formula is — pairing talented young riders with good horses and providing them with professional training and development.

Wandres is obviously proud of his achievement and his promotion into the dressage squad, but he is quick to give full credit to his horse, “We have trained up to this level together and also competed in our first Grand Prix together. It shows what an incredible horse he is. He gives everything for me, and I try to do the same in return.”

The chestnut gelding already earned high praise by international judge Dr Dietrich Plewa for his performance in the Louisdor Prize Final, “The best piaffe we have seen so far. On the spot, engaged and in a perfect frame and contact.”

Duke of Britain was bred by Tony and Sarah Pidgley in the United Kingdom before he was sold to German dressage rider Victoria Michalke at the 2011 P.S.I. Auction. Michalke and Duke of Britain placed fourth at the 2013 FEI World Breeding Dressage Championships for Young Horses in Verden. Later the horse moved back into the ownership of Ullrich Kasselmann and the ride was allocated to Wandres.

Their biggest success came in the FEI World Cup event in Zakrzów in October, the pair won the Grand Prix and also the Freestyle with a personal best score of nearly 80 per cent, 79.610%. An amazing achievement considering that this was the first international World Cup event for horse and rider. The pair has also moved up in the latest FEI World Dressage Rankings.

Wandres says, “I hope we can continue our success in the next season. All going well, I would like to compete at the German Championships in Balve next year and continue to progress in the World Ranking List.”