Werth and Weihegold Bag the Money at the 2018 CDI Stockholm 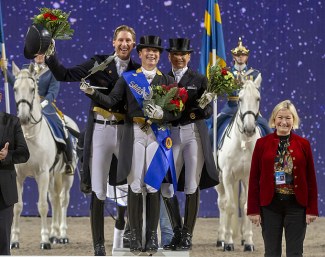 After opting to ride Bella Rose at the biggest summer competitions this year, Isabell Werth returned to the stage with her 2017 European Champion mare Weihegold for the indoor circuit at the 2018 CDI Stockholm on 2 December 2018. She bagged the money by winning the Grand Prix and Kur to Music.

The Top 10 competition at the CDI Stockholm is in its second, consecutive year running and is an initiative of Swedish Olympian Patrik Kittel. It is an invitation-only event. The principle is to invite eight of the World's top 10 ranked dressage riders and two wild cards, but in practice the competition field is slightly different as the riders can bring their horse of choice. This year it resulted in the "lowest" ranked combinations participating were ranked 82nd and 97th on the FEI World Ranking List, whereas the "lowest" ranked rider was placed 26th. Interestingly the world's number 2 Isabell Werth is in the top 10 with no less than 3 horses (a historic feat!) so she makes up only one of in fact 8 riders in total in the actual Top 10.

Aside from the stellar 232,000 euro purse, the Stockholm indoor event has extra flair with the huge LED jumbotron behind the arena, creating a special atmosphere and backdrop for the competition. With the CDI Stuttgart used to be - the venue where personal best scores and record scores were the task of the day - Stockholm has now taken over. The judges panel, which including Sanders, Romanov, Fransen, Wessels, and Ringmark, saw the best rides of the year not at the summer championships, but right there in Stockholm as new personal best scores were distributed to a plethora of riders on the two days of competition.

Isabell Werth (World nr 2) and Christine Arns-Krogman's 13-year old Oldenburg mare Weihegold (by Don Schufro x Sandro Hit) were unbeatable with 82.783% in the Grand Prix and  89.775% in the freestyle. She earned 70,000 euro in prize money for that kur victory.

"Our program has a high level of difficulty and we will do our best to deliver but we’re going there to have a lot of fun," Werth commented before the freestyle. "The atmosphere was so electric you could feel it in the warm-up arena on the other side of the main curtain," she said after the test.

"My horse was calm, feeling good and working well with me here in Stockholm. It’s like he’s dancing with me and is always looking for more. We are very happy to be here," said Dorothee.

Top 10 organizer Patrik Kittel (World nr 10 with Deja and 97th with Delaunay) brought the Oatley family's 12-year old Oldenburg gelding Delaunay (by Dr Doolittle x ) back into the show ring after a seven-month break from competition and got rewarded with personal best scores of 77.652% in the Grand Prix (3rd) and 85.875% in the freestyle (2nd).

"My choice of music was a bit daring and unusual. It was rocky, risky and really fit my horse," said Patrik about his Guns 'n Roses freestyle.