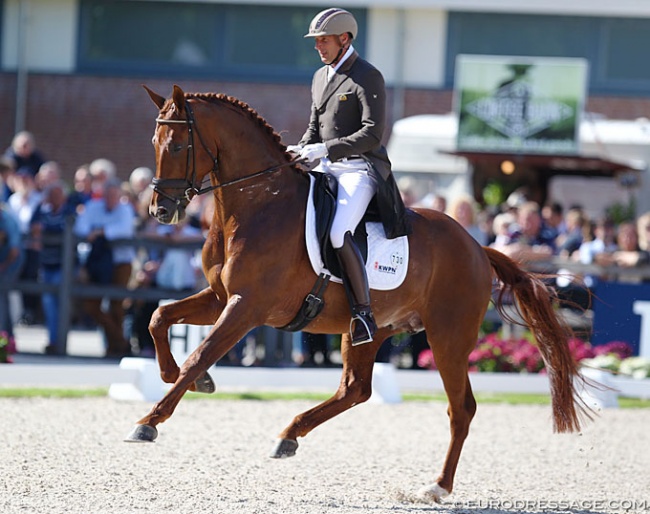 First Apple is an 8-year old Dutch warmblood stallion by Vivaldi out of Oogappel (by Partout).

Kooiman discovered First Apple as a foal at the 2010 Prinsjesdag elite foal auction. Patrick van der Meer got the ride on the tall and impressive stallion two years ago and trained him towards Grand Prix level.

Van der Meer and First Apple were highly successful in the young horse classes, developing Prix St Georges test and international small tour. They were the 2016 Pavo Cup reserve champions and won at the CDI's in Sint Truiden, Mechelen and 's Hertogenbosch with mid seventy percentage scores amongst numerous top three placings. They represented The Netherlands at the 2017 World Young Horse Championships in Ermelo (NED) in the 7-year old division, in which they finished in fourth place as best Dutch pair.

"First Apple is a dream come true for Sarah. They have been training with Patrick the past two weeks and it has been incredible for her to discover him and to get to know the horse with Patrick's help," Kooiman told Eurodressage. "She is a Grand Prix rider who loves to work with young horses. She was in Holland with her friend and agent Kate Hauser looking for youngsters to resell in the U.S.A. but ended up going home with her dream horse. It's not what she expected."

"It was an instant connection with this incredible horse," Lockman gushed. "I don’t think I had gone even one time around the arena when I felt the butterflies. By the time I had been in the saddle for 15 minutes I had tears in my eyes because I knew he was the horse for me. Apple is such an athlete with a top character and top talent for the sport. I am so thankful he has been in such super training and care with Patrick as this is really what made the horse so happy in his work and yet still a fierce competitor."

After Lockman first test rode First Apple she flew in her coach Scott Hassler to assess the new combination. Ibanez secured the horse for Lockman as her Tokyo hopeful.

First Apple flies to Florida on Saturday 20 October 2018, where he begins a new chapter.

"Sarah will be right there for First Apple's quarantine and Gerry Ibanez will fly her other horses to Florida so that she can continue working them with Hassler during the quarantine period," said Kooiman. "After that they will all return to their home back, Summit Farm in Murietta, California."

"I am so thankful to my sponsor Gerry Ibanez for believing in me and giving me this once in a lifetime opportunity to take this next step towards my goal of competing internationally at the top of the sport," Lockman added. "I look forward to an intense fall/winter of training with Scott on not only Apple but my other horses as well to prepare for the 2019 season. I am forever grateful to my team that has made this partnership possible and I am beyond excited for the future."