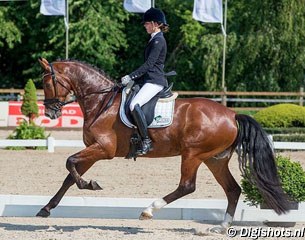 The 5-year old Gatino, the 6-year old First Apple and the 7-year old Elysias were the winners of the first Dutch KWPN qualifier for team selection for the 2016 World Championships for Young Dressage Horses (WCYH) which will take place for the first time in Ermelo, The Netherlands, the last week of July.

The World Young Horse Championships have always been a fixture at the CDI Verden in Germany, but for 2016 through 2018 the championships will take place in Ermelo, The Netherlands. The Dutch Equestrian Federation and KWPN society have also decided on a new selection format. Instead of hosting a series of training events/obversation trials, the Dutch representatives will now be decided through a competition format of a three qualifiers (Delft, Kootwijk, Etten-Leur) and a semi-finals in Ermelo.

The first of three qualifiers was held at equestrian centre De Prinsenstad in Delft, The Netherlands on Sunday 17 April 2016 and brand new to the format is also the instatement of a 7-year old division of which World Championships will also be held in Ermelo this summer. The judges in Delft were Jan Wolfs and Mathie Boomaars. The show in Delft was hosted outdoors and the windy weather proved a big challenge for the youngsters who competed outside for the first time this year.

The 2015 Dutch young horse champion in the 6-year old division, Elysias (by Jazz x Rhodium) bested the field in the 7-year old division, in which the horses have to perform a developing Prix St Georges horse test. Under Karen Nijvelt the now 7-year old Elysias scored 76.715%. Lynne Maas and the Dutch mare Electra (by Jazz x Ferro) were second with 74.265%, while Under 25 rider Kyra Klinkers slotted in third with Equirelle W (by Florett As x Donnerhall) on 73.475%.

The second Dutch WCYH qualifier is scheduled for 6 May 2016 in Kootwijk, followed by a third one on 10 June 2016 in Etten-Leur. The 10 highest ranked horses compete in the semi-finals on 14 July in Ermelo. The top 15 ranked finishers of the 2015 Pavo Cup Finals and the top 5 ranked horses of the 2015 Dutch Young Horse Championships are automatically qualified for the semi-finals.