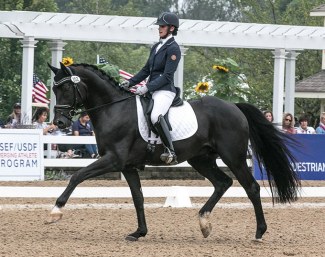 Fifteen stallions have been entered to participate in the 2018 North American Stallion Performance Test, which will take place at two stations, on the east coast in Maryland and on the west coast in California.

Twelve of them are dressage bred, three are show jumpers. The performance test is a 3-day format.

The American Hanoverian Society, Oldenburg Verband, and Hanoverian Verband have worked closely with the German FN to finalize the format for a North American Stallion Performance Test, which was launced in 2017. Participants are usually of the ages of 4 and 5. If a stallion misses a year of the sport test, he would not be able to breed the following year but could attend the next offered sport test.  Stallions age 7 or older must achieve their sport performance requirements though the traditional sport model of upper level competition results.