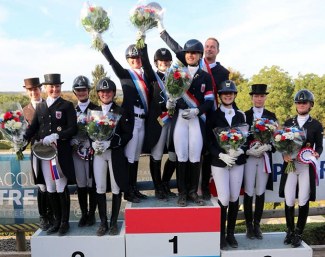 Six junior riders competed for the title in their respective division even though twelve participated in the M-level classes. Emma-Lou Becca and her 14-year old Hanoverian gelding Komet (by K2 x Wolkentanz I) reigned supreme winning all three rounds with 70.44%, 71.04% and 72.54% She ranked almost 15% ahead of Marie Schiltz on her 15-year old Hanoverian mare Dream of Beauty (by Dream of Glory x Longchamp) who scored silver. The bronze medal went to Celia Giorgetti aboard the 12-year old Decoeur.

The young rider division was significantly smaller with only two pairs completing both championship rounds, which meant that only two medals were handed out. The gold went to Charlotte Remy on her 16-year old Danish warmblood bred Herkules, who scored 65.66% and 66.18%. Magali Goergen and the 13-year old Hanoverian stallion Bayard (by Breitling x De Niro) landed the silver with 62.68% and 65.96%.