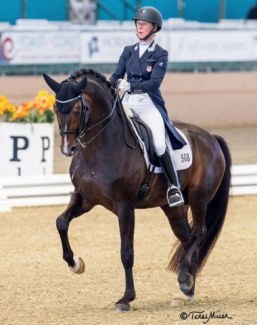 Sabine Schut-Kery and Sanceo have withdrawn from 2018 American WEG team contention after the 12-year old Hanoverian gelding sustained an injury.

"It is with disappointment that I have chosen to withdraw from the selection process for the 2018 FEI World Equestrian Games U.S. Dressage Team," Schut-Kery stated. " Sanceo sustained a minor injury and was cleared last Thursday to travel by the veterinarians, but because of the timing we are not properly prepared for the upcoming events in Europe. I want to make sure Sanceo gets the appropriate time to get back in top competition form."

Alice Womble’s 12-year-old Hanoverian stallion Sanceo (by Sandro Hit) has not traveled to Europe for the the team selection campaign and because of his injury will stay in America to recover. He has been officially withdrawn from team consideration.

"We have received incredible support from US Equestrian and appreciate the understanding of this difficult decision," said Sabine. "After such a great start at international grand prix, we are extremely excited about Sanceo’s future.”

The short lited U.S. WEG Team candidates are about to begin their Euro tour in Europe. The majority of them are staying at Eliane Cordia-van Reesema's Jewel Court Stud in Wuustwezel, Belgium.

"Most of the U.S. Short List combinations are now in Europe and staying in Belgium," Robert Dover told Eurodressage.  "Laura (Graves) comes right at the time of Rotterdam and will compete in Leudelange and Aachen. Shelly (Francis) is in Warendorf and Olivia (Lagoy-Weltz) is at Egbert (Kraak)’s near Amsterdam."