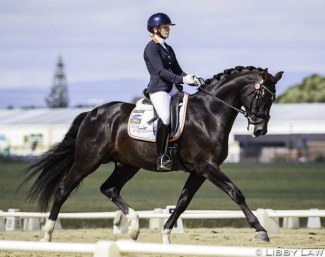 The 4-year old Fanfare MH, the 5-year old Aroha MH, and the 6-year old HP Fresco became the winners of the 2018 New Zealand Young Horse Championships which were held at the National Dressage Championships at Manfeild Park in Fielding, New Zealand, on 15 - 17 February 2018.

In the 5-year old age category, Burden felt a bit more competition from Kellie Hamlett. Burden topped the board twice for the title on Matthews' Hanoveriann Aroha MH (by Anamour x Weltliebe) with 75.80 and 75.00 points, but had Hamlett on Astek Geronimo very closely on her heels. Astek Geronimo scored 74.40 and 74.80 points.

After winning the 2017 Nationals in the 5-year old division Holly Leach and the Australian bred HP Fresco (by Fackeltanz x Lander x Richmeed Medallion) were a league of their own in the 6-year old division this year. In the first round the pair struggled to build up a lead with its 71.40% earned score, but in the second round they jumped well ahead with 80.00 points for the title.

The winners of each age class were invited to compete against each other in the Elite Equine Young Dressge Horse Final on Saturday 17 February 2018. The judges named HP Fresco the champion of champions.