Look Who's Back: Connaisseur 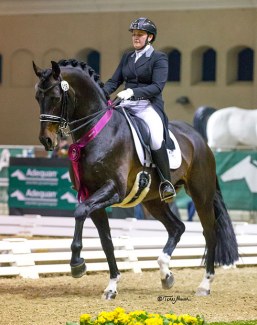 Highly popular as a breeding stallion in Europe for short while, the Hanoverian licensed Connaisseur finally made his international come back to the show ring at the 2018 CDI-W Del Mar on 1 - 4 February 2018. Under his Canadian owner Sara Pocock, the 11-year old stallion made his debut at international small tour level.

Bred by Fenna Schulte-Landwehr in Germany, Connaisseur is by Emma Hindle's early deceased Con Amore out of a Donnerhall. He has been licensed with the Westfalian, Dutch warmblood, Swedish Warmblood and Belgian warmblood society.

Connaisseur was discovered in Germany as a 2-year old by Dutch horse dealer Ad Valk, who quickly sold the young stallion to Canadian Sara Pocock. He was leased to the Swedish National Stud at Flyinge as a three year old, where he became the fourth highest producing stallion in Sweden in 2010. The horse then returned to Holland and went in training with Emmelie Scholtens.

Under Scholtens he was 3rd in the 2011 Pavo Cup Finals and 6th in the 2012 Pavo Cup Finals. The pair tried getting a wild card through Germany to compete at the 2012 World Young Horse Championships but was unable to get it.

Pocock brought Connaisseur home to her Character Warmblood stables in Vancouver, BC, in Canada in 2013 and has been working with Canadian Olympian Leslie Reid ever since.

In 2016 they debuted at Developing PSG horse level in Canada and in 2017 they tacked the national small tour classes. For the 2018 show season Pocock shipped her main stallion along with youngsters Jesperado (by Desperado x Flemmingh) and Incendio CW (by Connaisseur x Vivaldi) to California.

Back in the Limelight

At the 2018 CDI-W Del Mar, Connaisseur returned to the international limelight with solid scores in the small tour classes. The pair posted 64.735% in the Prix St Georges to finish fifth, but dealt with some tension issues in the Intermediaire I (62.941% , 9th) and popped back up high on the leader board in second place in the Inter I Kur to Music (67.650%).

When asked what Sara has planned for 2018, she replied, "we are very happy to be here. We've had a few set backs, but now hopefully we will be staying on the scene. I'm here for the next two shows, but hoping to come back down again later this spring. Just hard to leave our farm at home for long periods."

Connaisseur has low mileage when it comes to FEI level showing, but Pocock hopes to change that this year.

"For now our plan is to work through some tension in the show ring and get the mileage we need," she said "We weren't able to compete much at all the past two years, so now it's time to get up the centerline as much as possible. I'm planning to do a national show next weekend to hopefully sort out some of tension. Then add a couple more CDIs this spring to get some more exposure."

Connaisseur is already schooling the Grand Prix movements, so the future is bright.

"In an ideal world, I would love to get him into the Intermediaire II later this year," Sara stated.