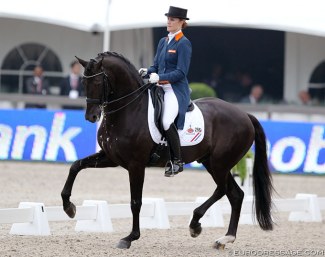 The KWPN society has announced that UB40, Westpoint and Wynton will be proclaimed Keur stallions at the 2018 KWPN Stallion Licensing on Friday 2 February 2018.

UB40 (by Olivi x Michelangelo) was licensed in 2004 and sold at the KWPN Select Sale auction for 145,000 euro to Wim Zegwaard. A year later he sold to Iron Spring Farm in the U.S.A. and only bred for a brief while in The Netherlands. Under Alex Robertsen, UB40 was competed at national level from young horse to small tour between 2007 and 2010.  His most famous offspring is the KWPN licensed Grand Prix stallion Apache.

Westpoint (by Jazz x Michelangelo) was licensed in 2006 and became the Stallion Performance Test winner. He won the 2007 Pavo Cup Finals and as a 6-year old he won the 2009 World Young Horse Championships and was competed at international Grand Prix level by Kirsten Beckers. Three weeks ago, he sold as a gelding to Italian Sara Perrucci in the U.S.A. His most successful offspring are small tour horses Casper, Darabel, and Eastpoint.

Wynton (by Jazz x Matador). He was licensed in 2006 and became the 2007 Stallion performance test winner and 2008 Pavo Cup winner. Under Madeleine Witte-Vrees he was trained to international Grand Prix level. A severe injury sidelined the stallion for three years, but he's now making his come back in the show ring. He has already sired five licensed sons.