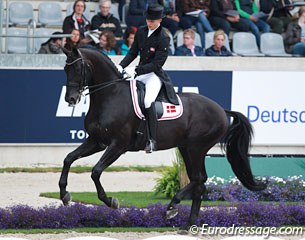 The 14-year old Hanoverian stallion Hotline has been leased to the Warendorf State Stud for the next three breeding seasons starting in 2018. Owner Blue Hors stud made this announcement at their national show hosted in Randbol on Saturday 11 November 2017.

Bred by Friedrich Oppermann and presented at the 2005 Hanoverian licensing by Heinrich Giesselmann, Hotline is by Hofrat (by Gribaldi) out of De Nira (by De Niro x Wendepunkt x Busoni xx). He sold at the licensing auction for the then record price of 800,000 euro to Paul Schockemohle and Blue Hors stud. Later on Blue hors obtained full ownership over the stallion.

Hotline made his international Grand Prix debut under Maik Kohlschmidt in December 2013. The German rider competed the dark bay stallion through 2014. In 2015 Blue Hors' new stable jockey Daniel Bachmann Andersen took over. In 2016 they were in the running for Olympic team selection.

Hotline did his final international at the 2016 CDIO Aachen after which the Danish Olympic team was announced. Hotline was not selected on the team. The stallion did not compete at all in 2017.

Blue Hors confirmed to Eurodressage that Hotline has been fully retired from sport.