The Shaping of Piaffe and Passage by Fashion, History and Genetics: Part III 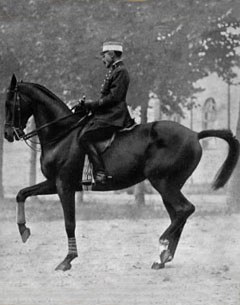 Read Part I and Part II

THE IMPORTANCE OF PIAFFE AND PASSAGE IN THE DEVELOPMENT OF COLLECTION

Besides their inherent beauty, piaffe, passage and the transitions between them are fundamental to horsemanship because they represent the summit of collection. This often poorly understood word means that the rider has transformed the innate energy of the horse (used in his natural environment to either flee from danger or fight it) into a symmetrical, serene energy coming from the rider that can be deployed on instant request, forward, vertically or laterally in any combination, in any desired degree of activity, and at any gait. The other essential attributes of collection are cadence (the slowest even tempo relative to each gait that a horse can perform on request and without visible strain), self-carriage (the ability of the horse to remain balanced without the constant help of the rider’s hands) and self-propulsion (the permanent desire to go forward within the parameters of the desired gait).Collection is achieved by eventually developing the activity of the hind-end, the relaxation of the top-line and the gradual elevation of the front-end through a series of progressive gymnastic exercises. The practice of piaffe and passage and the transitions between them considerably helps the realization of those three essential goals through the enhancement of the horse’s symmetrical diagonalization. The main value of diagonal movements (firstly piaffe and passage) resides in the fact that the entire top-line of the horse swings from side to side: one side shortens while the other lengthens; creating an alternating sequence of contraction and relaxation that keeps the spine flexible. This, in turn, contributes to lifting the back (the rounding of the top- line), which is necessary for carrying the weight of the rider efficiently. In essence, piaffe and passage are the goals of academic dressage, but they are also the ideal exercises designed to facilitate its development.

THE TRAINING VALUE OF PIAFFE AND PASSAGE

Piaffe as behavior control: The practice of even a small piaffe appropriately counteracts the resistance of a horse that loses his activity, braces his feet or slows down his movement, particularly in the exploration of collection in gthe slower gaits. I heard Tom Dorrance, the “Patron Saint of Natural Horsemanship”, say that to keep a horse at attention and under control, one must “maintain life in the horse’s feet.” No better description can be given of piaffe as the most elegant form of behavior control and as an effective way of transforming a resistance into an extremely beneficial exercise.

Piaffe as basis of dressage gymnastics: any attempt at piaffing mobilizes the feet and reduces the base of support of the horse, rendering him more mobile in what was called by Baucher “the instable equilibrium”, which increases his mobility. It rounds the back by engaging the hind legs and elevates the front legs when they are first brought to a vertical stance (fundamental condition). Piaffe, even of mediocre quality is, for instance, the best way to organize the canter of an unbalanced horse. A few steps of shuffle in place achieved in lightness will give the rider the opportunity to achieve a better depart and a shorter canter on its way to become collected. Piaffe is the essence of movement while immobility in a square halt is its opposite. Obtaining instantaneous transitions from one to the other, back and forth, is one of the best lessons a horse must learn.

A little diagonal mobility in place is the mean by which the horse squares himself in the halt with an engaged position that prepares him for a quick depart. This is the concept of “collection in place” that came before “collection in movement” in the Baucher progression, but some of his followers noted that the reverse approach (a little piaffe before the halt) suited more horses,particularly when they lack energy. La Gueriniere also noted that engaged halts are difficult for the horse and he used a quick half-halt as a preparation for collection. However, if the half-halt is used to load the hind legs by reporting too much weight onto them, it becomes an obstacle to mobility (the “quick hind leg” everybody wants to experience). It is always better to bring the hind legs under the mass than bringing the mass back on top of the hind legs. 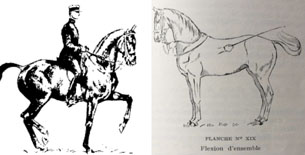 Captain Charles Raabe, the disciple of Baucher who made the most exhaustive and accurate study of locomotion (pre-movies), also codified what we know today as “work-in-hand with the whip” for the purpose of suppling the horse before starting the ridden work. He found that, in order to obtain square halts and “collection in place”, it is better to animate the horse with some clucks of the tongue just before the halt by demanding a few “half steps” that squares his four legs. It is, in effect, the “study of piaffe”. The trainer can then ask for the halt as soon as the legs are lined up (front legs absolutely vertical and parallel, hind legs slightly flexed and parallel). To mark the halt, Raabe uses the “effect on the whole” or “effet d’ensemble” in French, obtained by a steady pressure of the whip on the loins and a soft verbal command: WHOOO.... This was another innovation of Raabe. It is the key to obtain immobility from the piaffe in a correct posture with a horse ready to move again in whichever gait we desire. Decarpentry, who re-published Raabe’s method, based his own method of teaching piaffe on the halt from trot/depart to the trot work (“Piaffe and Passage”), Xenophon Press).

When we see talented dressage horses today that can piaffe with energy - but won’t stop because of too much excitement - it is the practice of Raabe’s “Effect on the Whole” that is missing from their training. It immobilizes the horse, calms him down, and maintains the collection for an instant. Under saddle, the pressure of the whip is replaced by a closing of the legs, a steady, light pressure of the spurs and an immobile seat. When the horse is trained, a light squeeze is all it takes. One of the most important aspects of the Totilas’ work with Gal was the frequent use of halts and instant departs into trot, passage or piaffe, with return to the halt to re-establish lightness to hand and legs.

In the embedded video in the top right corner you witness the amazing energy of Totilas in the piaffe, while never losing the regularity of his tempo, ending in a perfect, instant, square halt in total calm. This is the ideal of the collected work.

Piaffe as a means to develop Symmetry: Piaffe and passage (as well as Spanish Walk) reveal very clearly the asymmetries of the gait (reflecting a crooked posture) that most riders cannot evaluate easily in the basic gaits. For instance, a horse with a slow right front that steps short in the walk will step further back than with the left front in the piaffe. In the passage, that leg will not fully unfold forward as well as the other one. The slowness of the passage, the absence of forwardness in the piaffe, the elevation of the Spanish Walk, will all reveal what we could not see in the regular walk. This gives us the opportunity to attempt a correction and see how well it works. Studies are on their way today (universities of Uppsala and Utrecht) to figure out this problem of asymmetry, but serious classical trainers have long used the piaffe and passage work to analyze the symmetry problem and resolve it in a logical, gymnastic manner. In the halt as in the piaffe, the normal stance of a horse always placing one front leg further back than the other (behind the vertical), must be continuously corrected. Piaffe and passage can (and should) be practiced forward, backward, sideways and on curves in order to be fully developed and truly useful to the rest of the horse’s education. It is in the lateral exercises, one side being always easier than the other, that we observe the horse’s functional asymmetry and can work at its correction. 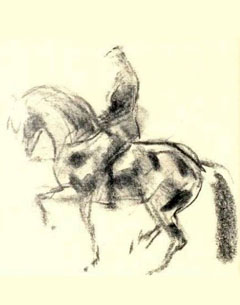 Piaffe’s artistic value: A horse piaffing rhythmically under a quiet rider, then moving forward into a majestic passage and returning to piaffe without losing the cadence and gracefulness that are the cornerstones of the art, is undeniably one of the most glorious spectacles given to lovers of horsemanship. Piaffe, passage, and the transitions from one to the next, represent the very essence of classical horsemanship, the hardest exercise to do well and the most useful to the horse’s training. In order to fulfill this ideal, horse, rider and spectator must clearly share in the obvious pleasure provided by the display of equestrian harmony. Such work is a glimpse of the nature of the Centaur. Unfortunately, this model based on the effortlessness of the rider and the enthusiasm of the horse, remains rare today.

During the Renaissance, the picture of a man sitting on a piaffing horse (performed in a lightness that appeared “natural”), became the symbol and the testimony, not only of his skill as a rider, but also of his social status, his elegance, and most importantly, his character. The emerging moral value of equitation was a fortuitous consequence of the humanist theories emerging from the renewed interest in ancient Greek and Roman literature. Xenophon equestrian writing was being rediscovered by an Italian translator at that time. It may be useful to remind modern riders of the fundamentals of both the substance and the form of dressage. On the substance, Oliveira said it best: “Art is technique sublimated by love”, that means that Technique must be understood as the “Why of the How”, as colonel Carde said rightly, and Love can never be forgotten. On the form, the old Italian notion of “Sprezzatura”, the quality of the aristocrat to make the difficult things appear easy that La Gueriniere called gracefulness, must be evident in any dressage presentation. True dressage requires, according to the general L’Hotte, a graceful horse “enjoying himself in his air”, performing “as of his own accord”, and a rider that knows to always be generous to his horse and grateful for his effort.