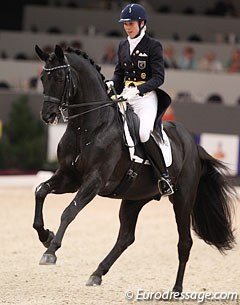 "The pitch black stallion  collapsed during his light morning training session under his longtime rider Terhi Stegars," said saddened co-owner Tanja Kayser. "The vet, who was in the stable at that point, could not but diagnose his death. Terhi sustained some injuries and is currently being treated by a doctor.”

”I’m truly devastated to loose my best friend, my hero,” Stegars told Eurodressage. “I will be operated on tomorrow morning to treat multiple fractures of the left shoulder socket.”

Bred by Eward Hartmann in Germany, Axis TSF was by Sixtus out of Akansas (by Angard). He was initially owned by the British Sian Prosser-Reade of Lower Lidham Hill Farm who bought Axis at the 2001 Trakehner Stallion Licensing. As a youngster the black stood up for stud with Gerard Gerling in Germany. He did his stallion performance test in 2002 in Neustadt/Dosse and scored 122.95 points (126.98 for dressage and 110.17 for jumping), which landed him 5th place out of 43 participating stallions.

Terhi Stegars began riding Axis as a 3-year old in 2002, but in 2003 the stallion moved to Neustadt/Dosse and then to his owner in the U.K. Stegars and Axis were re-united in the summer of 2005. In 2008 they made their small tour debut and in 2009 they moved to national Grand Prix level. They won silver at the Finnish Championships that year.

In September 2010 Stegars moved to Luxembourg and in 2011 she acquired ownership over the horse. In February 2013 Terhi sold a half ownership share to her employer, Tanja Kayser.

Stegars and Axis had an extensive career at international Grand Prix level. The pair made its CDI debut at the 2011 CDI Hagen. They represented Finland at the 2011 and 2015 European Dressage Championships, the 2013, 2015 and 2016 World Cup Finals in Den Bosch and at the 2014 World Equestrian Games. Their last show together was the 2016 CDI-W Lyon exactly one year ago.

" Axis leaves behind a big void," Kayser explained. "He was a very special horse with a loving character and a fun expression. We wish Terhi a speedy recovery and much strength in this difficult time."