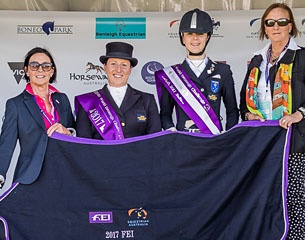 Thirty-one elite combinations and two 4* judges made for an incredible introduction to the first FEI World Dressage Challenge held at the magnificent Boneo Park in Victoria, Australia on 18 - 20 October 2017. The event offered five performance levels and two age groups (12-16 and 16 years of age and above): Intermediate, Prix St Georges, Advanced, Medium and Elementary competitions were staged and there were two Classifications – Individual and Team.

The FEI World Dressage Challenge is designed to create a ‘bridge” between the National level and the first FEI level of International competition and is aimed at all Dressage riders with a dream goal of representing their country in international Dressage at the highest level and on home soil. This is Australia’s inaugural year in the long-running FEI competition in the new format with its last participation being in 1999 and on the back of today’s success, we look forward to having it return to our dressage calendar next year!

The first class was the Youth class with 7 strong combinations. First place went to Isabelle Luxmoore riding the gorgeous Linus WK (68,334%). Second place went to Jasmine Haynes and Steendieks Champ Of Glory (67.167%) and third was Caitlin Porter and Marena Display (66.417%).

The Senior II class was another strongly contended class with 0.068% between first and second. The winner was Sidney Hoffman (66,554%) and the fabulous Freedom C who enjoyed a very successful day! Cassia Montgomery and Rebel M came second (66,486%) and Madison Layfield riding Remi Legenderry in third (65,608%).

The final class of the day was the Intermediate I which was won by another stunning stallion, Westewind, ridden by the 16-year-old Jamie Mita (67,698%) who was the youngest competitor in this class, with Stephanie McDonald and Che De Jeu (67,237%) coming second and Sara Price and Cheval De Luxe in third (65,987%).