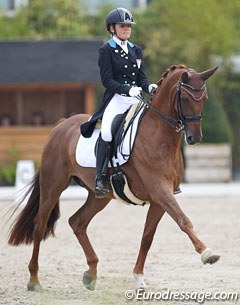 No less than one year (!) after the 2016 Italian Dressage Champions in Caselle di Sommacampagne, the tribunal of the Italian Equestrian Federation (FISE) suspended trainer Italo Cirocchi and his young rider student Beatrice Arturi for a positive doping test on the horse Le Bom.

On 26 September 2017, one day after the 2017 Italian Championships in Montefalco, where Arturi claimed the Young Riders title, the FISE Tribunal cast its verdict in the positive doping case of Le Bom dating one year back.

At the 2016 Italian Championships, where Arturi won bronze in the Technical championship and silver in the Kur in the junior riders division, the now 10-year old Westfalian gelding Le Bom (by Louis Le Bon x Pit I) tested positive to four substances - flunixin, lidocaine, prilocaine, mepivacaine, which is considered "controlled medication" on the FEI 2016 Equine prohibited substance list.

Both the trainer and the rider have been suspended for one month, right after the 2017 show season came to a close. They are also ordered to pay a fine of 500 euro.

As a consequence, Arturi has lost her 2016 medals. Technical bronze will go to Filippo di Marco and kur silver goes to Lucrezia Sensone, which means di Marco moves into the bronze medal position.