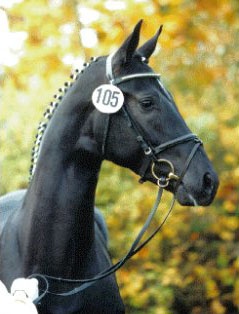 The Celle state stud owned Don Crusador has passed away at age 19. In agreement with the veterinarians, Celle had the stallion euthanized on Friday morning 13 July 2017.

Bred by Imke Eckert, Don Crusador was born in 1998. He was by Don Bosco out of Larissa (by Lauries Crusador xx x Pik Bube I x Moltke).

He became the champion of the 2000 Hanoverian Stallion Licensing in Verden and did his 300-day stallion performance test in Adelheidsdorf in 2001. He finished sixth overall with 121.68 points, placing third in dressage with 133.06 points and 26th in show jumping with 96,57.

The black stallion made his show debut under Wolfhard Witte at L-level in 2003, but he never really placed highly at any significant young horse championships. In 2006 he moved to Prix St Georges level. In 2009 he dropped back to M-level and was briefly competed by Sven Rudolph and Birte Senftleben. He did his last competition in October 2012 at age 14.