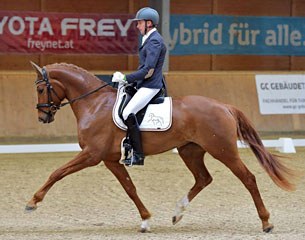 Slovakian Michael Bugan saw his wish fulfiled at the 2017 CDI Wiener Neustadt in Austria on 14 - 16 April 2017, after he twice scored above 75% and obtained his official qualification for the 2017 World Championships for Young Dressage Horses in Ermelo, The Netherlands. Aboard the chestnut mare Scarlett O' Harrah, Bugan won the 5-year old division.

The 29-year old Bugan brought along the Hanoverian mare Scarlett O' Harrah (by Spörcken x White Star) to Wiener Neustadt with the goal to qualify for Ermelo. Riding the mare for its Austrian owner Eva Buchar, Bugan scored a winning 77.00% in the preliminary test and also posted the top score of 78.000% in the Finals test.

The Slowakian Bugan is based with his business in Austria and trains with Elisabeth Waldbauer-Schall as well as with judge Peter Holler. He has been riding Scarlett O' Harrah for one and a half years.

"Her strong side is her great trot and the canter is good as well, but we are working right now to improve it even more," Bugan told Eurodressage. "If you don't disturb her balance, she's overall super nice to ride."

Bugan sees a dream come true to compete in Ermelo and has high, but realistic expectations about the Championship.

"We will be satisfied if she does her best and behaves in front of such a big audience," said Michael. "We know we have a good horse and we hope that she will show that."

Bugan also had a second ride with him in Wiener Neustadt, Ilse Schuss' 5-year old Austrian Warmblood  Floretto DK (by Furstenball x Samba Hit I) , with whom he finished third and fourth.