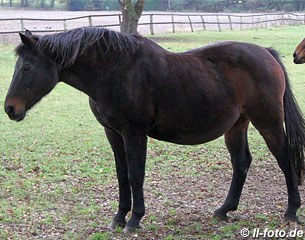 The renowned foundation brood mare Loretta has passed away. The 30-year old Loretta was an Elite Main Studbook Mare and was euthanized due to old age.

Loretta was born in 1987 and bred by Reinhold Harder. She was by Ramino out of Lassie (by Welt As x Luciano x Elfenwache).

Her daughters Leonie (by Rubinstein), Loreana (by Don Schufro) and La Traviata (by Sandro Song) became top producers on their own part. Leonie produced the licensed Likoto Hit (by Likoto xx) and Loreana produced the licensed Royal Schufro (by Royal Hit) and the FEI level horses For My Life (Gabriela Stumpf) and Wild Diamond (Anouk Hoet). Haras de Hus sold La Traviata to Belgium and the Scottish owned Loretta Live (by Royal Dance) produced the Oldenburg bred stallion Super Mario (by For Compliment) who is a successful sport horse in Denmark.