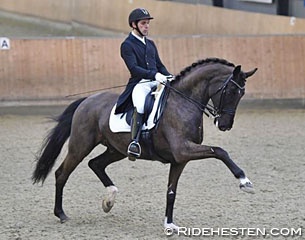 Spanish Olympian Severo Jurado Lopez premiered two new horses at Grand Prix level at the national show in Esbjerg, Denmark on 20 - 22 January 2017. The Spanish crowd favourite, who works for Andreas Helgstrand in Denmark, has received the ride on Deep Impact and Dragao Figueiras.

Aboard 14-year old Hanoverian gelding Deep Impact (by De Niro x Rubinstein), Jurado Lopez won the Intermediaire II with a whopping 75.570% as well as the Grand Prix with 75.867%. Deep Impact was originally acquired by Andreas in Hungary as a birthday present for his wife Marianne, but the talented black gelding has proven to be a good match with Severo with the scores to now back it up.

"Yes the horse was for her (Marianne)," Helgstrand told Eurodressage. "Severo rides him fantastic and that was the reason we wanted to see how he was in show. (He's an) amazing horse for the top I think; just a shame he is 14."

Severo also secured the ride on Antonio Simoes' 9-year old Lusitano stallion Dragao Figueiras (by Unico x Xaquiro), who was previously competed at international small tour level by Spanish team rider Jose Antonio Garcia Mena. In the autumn of 2015 Garcia Mena and Simoes ended their collaboration and one month later Spanish Morgan Barbançon briefly got the ride on the horse, but that didn't last very long and the stallion returned to Portugal.

Dragao is now in Denmark with Severo and the new pair had an exciting show debut. Dragao did his first show at Grand Prix level in Esbjerg and straight away secured a fourth place in the Intermediaire II with 72.281%. In the Grand Prix they were 9th with 68.067%.

Severo is thrilled with having a further two Grand Prix horses to compete alongside his Olympic ride Lorenzo.

"I'm really happy with my debut with them," said Jurado. "It's my job at Helgstrand to train and compete the horses, nothing further is planned yet! I'm happy that Andreas trusts me and decides to give me these quality horses in my responsibility."