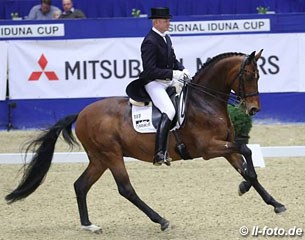 "The decision was not an easy one, but I've made it. I will no longer try to qualify Imperio for the World Cup Finals," Schmidt explained. "As only three riders per national can go, I don't think I have very good chances. Salzburg was an absolutely good performance, but Fabienne and Jessica von Bredow-Werndl are also really good. As I'm not sure that we can catch up with both of them, I made the decision."

Schmidt scored 76.130% in the Salzburg World Cup, 77.645% in the Stuttgart World Cup, and 76.150% in the Lyon qualifier. The Paderborn based rider will now focus on the outdoor season in the spring.

"We will use the winter for focused work and start the outdoor season well prepared," Hubertus added.

Schmidt recently assigned Michael Erdmann to design a new freestyle for Imperio, and the German freestyle pope unoriginally chose for Queen music. Hubertus, however, is thrilled with his new kur.

"The Queen medley is absolute class and I get goose bumps when I am in the moment before the diagonal for an extended trot and hear 'don't stop me now'," said Schmidt. "Not only I but also the crowds like the music and choreography of this kur, because we got high marks from the spectator judging."