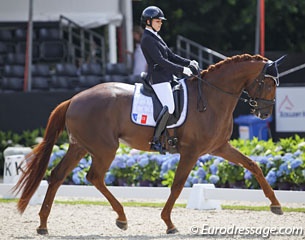 The 4-year old Valentin, the 5-year old Diamondgio and the 6-year old Barroso became the winners of the 2016 French Young Horse Championships held at the Cadre Noir during the 2016 CDI Saumur on 23 - 25 September 2016. Belgian riders snatched away two titles and two reserve championships at this French young horse event.

In the 4-year old division Belgian Larissa Pauluis and the Westfalian gelding Valentin (by Vitalis x Fidermark)  claimed highest honour as the high scorer of the division with an 86.2% in the preliminary round, 88.3% for presentation and 85.80% in the final round to win with a total of 86.2 points. French Julien Vincent became the runner-up with the Selle Français bred Countrymusic Crambery (by Don Juan de Hus x Donnerhall). The pair scored 83.2%, 77.5% and 87.4% to finish second overall on 85.8 points. Marion Perret and the Belgian owned KWPN mare Hannelinde (by Dream Boy x Sunny Boy) were third with 80.0.

French representative at the 2016 World Young Horse Championships, Lena Thouvenin and the Oldenburg bred Diamondgio (by Diamo Gold x Pik Noir) topped the board at the French Nationals in the 5-year old division. Owned by the TH DressValue, the horse scored 76.8% in the preliminary round, 77.2% for presentation and 84.6% in the Final round to total 83.6% for the gold medal. Belgian Dominique Mohimont won the silver on the Dutch warmblood Genie (by Zhivago x Sandro Hit) with 79.6%, 84.7% and 82.00% to finish second on 82.4 points. Julien Vincent and the Dutch bred Girello VWM (by Andretti x Royal Dance) were third with 79.6 points.

In the 6-year old division Belgian Larissa Pauluis grabbed the title aboard the Dutch owned KWPN stallion Barroso (by Bordeaux x Saros). The pai scored 79.9% in the preliminary round, which served as a warm up. The final round counted for the title and Pauluis earned 83.6%  on the bay stallion for victory. Belgian Amandine Prevost and the German Sport Horse bred Quaterdance (by Quaterback x Expo'se) were unable to complete a hattrick and win the third, consecutive French Young Horse title in a row. Instead they became the reserve champions after scoring 76.4% in the warm up round and 81.6% in the Finals. French Grand Prix rider Anne Sophie Serre ranked third on Actuelle de Massa (by Paston x Fuzilador) were third with 79.8.