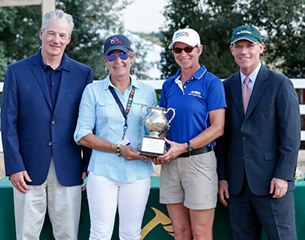 “Not only did Joan Clay work tirelessly before the NAJYRC even took place, but more impressive was how she was always going the extra mile, no matter what it took, for her Region 5 competitors during the entire week of the competition. She is the Energizer Bunny of chef d'equipes, who despite the ups and downs of the event, enables her competitors, coaches and parents to keep their focus on competition and good sportsmanship,” stated Roberta Williams, USDF FEI Jr/YR Committee Chair.

The Albers Award is named in honor of long time USDF Region 1 Chef d'Equipe, supporter, and good friend, Patsy Albers. The award is presented annually at the USDF North American Junior & Young Rider Dressage Championships, to the dressage chef d'equipe who best demonstrates the same level of dedication, enthusiasm, and team spirit shown by Patsy throughout the years.

The award is open to all of the dressage chefs d'equipe, and any competitor or chef d'equipe can nominate a candidate by submitting a written explanation as to why that chef deserves to win the Albers Award.