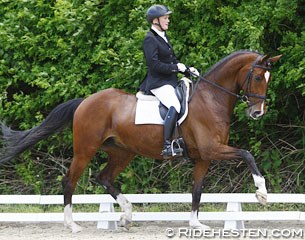 2015 and 2016 have been major years of change for Rasmussen, who is moving from Denmark back to her home country Norway. She is selling her state-of-the art luxury home and equestrian yard Kleppenhus in Ebeltoft, Denmark, and is relocating to a new property in Kristiansand, Norway.

Rasmussen also retired her number one Grand Prix horse, the 16-year old Westfalian Fernandez after he sustained an injury in Odense in October 2015. She also sold her rising Grand Prix horse Borencio (by Florencio) to Alexandra Andresen. Cathrine is now left with several youngster which she is bringing along to Norway.

The new star for the future will be the 9-year old Danish warmblood mare Dream Time which she got at Andreas Helgstrand's yard after he sold Borencio for her. Dream Time is by Don Schufro out of Dreamgirl Sønderskov (by Leandro).She is bred by FT Stutteri and was owned by Morten Arvé Thomsen.

Dream Time was previously competed by Eireen Crawford as a youngster and then taken from L-level to Prix St Georges by Sarah Thomsen. The mare did only one national show in 2015 and one in 2016 so far. In 2012 she produced her only foal so far, a stallion named Real Chance (by Romanov).

"She is exceptionally talented for piaffe and passage and with lots and lots of power," Rasmussen told Eurodressage. "After the sale of Borencio, I suddenly stood with my oldest horse being 5 years old, so I decided to look for something a bit older, and was very lucky to find her. The name is Dream Time, and she lives up to it."