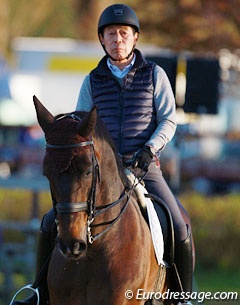 Japanese Hiroshi Hoketsu and Brazilian Dr. Jorge da Rocha are out of contention for team selection for the 2016 Olympic Games in Rio de Janeiro, Brazil in August.

The 75-year old Hoketsu acquired Wolfram Wittig's 15-year old Westfalian bred Brioni W (by Breitling x Diego xx) as his 2016 Rio Olympic hopeful in January, but was never able to compete the dark bay. Hoketsu was supposed to show at the CDI Mannheim on 29 April - 1 May 2016 but failed to turn up because the horse has struggled with lameness issues since then.

Hoketsu, who was a CEO of the pharma division of Johnson & Johnson in Germany until 2003, was hoping to become the oldest athlete competing at the Rio Olympics.

Brazilian mogul Dr. Jorge Ferreira da Roche missed his chance to qualify on the Brazilian team for Rio by not showing up at the 2016 CDI Sao Paulo, which was held 13 - 15 May 2016. Da Rocha acquired Valentina Truppa's 15-year old Italian warmblood Eremo del Castegno (by Rohdiamant x Weltmeyer) in December 2015 as his Olympic hopeful.

The 70-year old Da Rocha had to compete in Sao Paulo as only one Brazilian CDI show is now left for riders to achieve their Minimum Eligibility Scores and two 64% are required. Jorge failed to show up at the May CDI Sao Paulo because of personal ill health. He last competed at a CDI in October 2012.