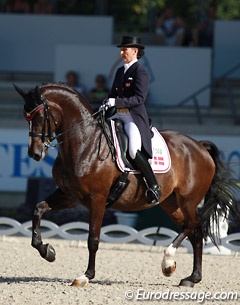 The Danish Equestrian Federation has announced a long list of 10 riders who will be considered for 2016 Rio Olympic Games team selection. Denmark was the only country able to qualify a composite team for the 2016 Rio Olympics.

At the moment 10 combinations have been submitted to the Danish Olympic long list, but it can still expand before official team nomination on 19 June 2016. On 16 July team trainer Rudolf Zeilinger will pick the definite team of four rider-and-horse combinations that will travel to Brazil.

Danish riders have three months left to show their best form. Several events have been marked as team observation trials, including the CDIO Odense, the Danish Dressage Championships in Broholm and the CDIO Aachen.

"It will be exciting to follow the combinations up til final selection on 16 July. There are plenty of important shows at which the individual pairs have to show stability and high level," said Danish team captain Kimi Nielsen. "I'm really happy that our long list includes both seasoned riders with several Olympics down their belt as well as young riders, which we know from the youth squads. It says something about the good continuity in our sport and good talent scouting."