Olympic Champion Horse Uthopia to be Sold at Auction Without Reserve 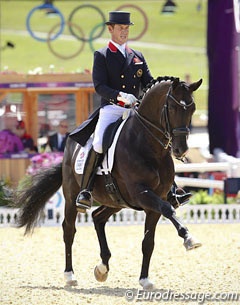 Wilsons Auctions have been instructed to sell by public auction, to the highest bidder, the former Olympic Champion Horse Uthopia, as part of their Unreserved Prestige Auction on Friday 27th May 2016. Online bidding will be available and further details will be released in due course.

Uthopia, who was ridden to gold medal glory at London 2012 as part of the British Olympic Equestrian team, is being sold by Tom Keenan (Keenan Corporate Finance) and James Neill (HNH Group) who hold joint ownership of the horse by virtue of their respective roles as Trustee in Bankruptcy over two separate bankruptcy estates.

The 15-year old KWPN licensed stallion Uthopia  (by Metall) won double silver at the 2011 European Championships, team gold at the 2012 Olympic Games, and team bronze at the 2013 European Championships.  Between 2014 and 2016, Uthopia has only competed at a few shows under Charlotte Dujardin as back-up horse for Valegro. Over the course of three years she showed the black stallion in Addington, Saumur, Windsor, London and Amsterdam.