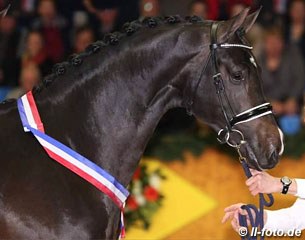 Igor, the 2016 KWPN licensing champion, has been renamed Indian Rock. The champion by Apache x Vivaldi is owned by horse dealer Ad Valk in partnership with Jan Vink.

Indian Rock is bred by Jan de Bruijn and is out of keur mare Crisjena, who won the Dutch Mare Championships in 2010.

"Last Monday he had a rider on his back for the first time. He knows the work on the lunge line and it was time for the next step. I think two to three year old young colts already get a lot on their plate and after the winter to get introduced to the saddle to get used to the rider is plenty. The KWPN Spring testing is too early, he still needs to turn three in July."