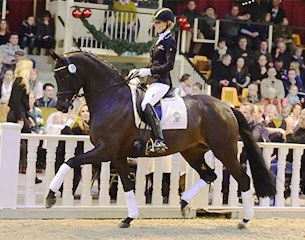 The show jumper Stalognia and the dressage horse Fasine became the price highlights of the 36th P.S.I. Auction in Ankum, Germany, on Sunday 6 December 2015. Paul Schockemöhle and Ullrich Kasselmann created another outstanding and exquisite collection of show jumping and dressage horses, and they were finally highly satisfied with their two top horses and a total revenue of 17,795,000 euro.

The 6-year old grey jumper mare Stalognia (by Stakkatol x Chacco-Blue) was the top priced horse of the auction, selling for 1.7 million euro to France.  Stalognia is a daughter the successful Chalanda, which sold at the 2012 P.S.I. Auction. Paul Schockemöhle confirmed this decision: “Stalognia is maybe the best horse I have ever bred.”

The top priced dressage horse in the collection was the 6-year old Oldenburg mare Fasine (by Furst Romancier x Sandro Hit). She won the Oldenburg Elite Mare show in 2012 and was the grand champion in the 6-year old division at this year's Bundeschampionate. The German laywer, real estate agent and race horse owner Dietrich von Boetticher acquired Fasine for 1.3 million euro. Von Boetticher owns the Bavarian Gestut Ammerland, but the dark bay mare will stay with his current rider Isabel Freese-Bache to continue her dressage training.

The third most expensive horse of the collection was the jumper mare Chacco's Girl (by Chacco Blue x Baloubet de Rouet), which sold for 900,000 euro.

American Jamie White-Welling acquired three dressage horses for her collection: Belle Fleur (by Belissimo M) for 450,000 euro, as well as Dallas (by Desperados) and Rebroff (by Robespierot). The chestnut mare Belle Marie (by Belissimo M) sold to German customers for 200,000 euro.

The dressage horses in the 2015 PSI Auction collection sold for an average price of 316,739 euro.

Host Ullrich Kasselmann concluded by the results of 36th P.S.I. Auction that they are following the right path. Schockemöhle and Kasselmann will continue to support and foster the breeding business to maintain the basis for the P.S.I. auctions. “Besides, Paul and I have decided to fertilize the tournament scene with new ideas – be ready for amazing novelties,” said Kasselmann and his partner, who want to keep surprising.

For more information on the collection, the auction, POCs and service, visit www.psi-auktion.de