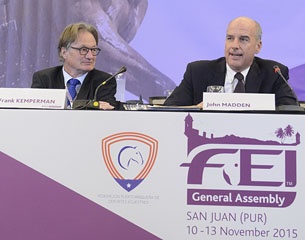 "Olympic Agenda 2020 is a driving force in this process, but even prior to that we already knew that changes needed to be made to our formats and the presentation of our sport," the FEI President said in his opening address. "But why do we want to change our formats and the way our sport is presented? The answer is really quite simple, because we want to remain relevant in today's ever changing sporting landscape and gain the exposure and visibility our sport deserves. As the IOC President aptly said at the IOC Session in Monaco last December, 'to change or to be changed, that is the question.' This is why we are here today, to lead that change. We need to take advantage of the excitement and drama of our sport, make it easier to understand, attract young and larger audiences, be broadcast friendly and see more nations represented in our sport."

In today's session, the FEI President underlined the implications of Olympic Agenda 2020, and the move from a sport-based to an event-based Olympic programme for Tokyo 2020, before opening the floor to the Olympic equestrian discipline Chairs, John Madden (Jumping), Frank Kemperman (Dressage) and Giuseppe Della Chiesa (Eventing).

John Madden underlined the interest and understanding the IOC President Thomas Bach has of equestrian sport, which was clearly demonstrated during his official visit to FEI Headquarters last week, and the very real need to respond to the Olympic Agenda 2020 recommendations.

Maria Gretzer, the Swedish Olympic Jumping rider and athlete representative on the FEI Executive Board since 2013, strongly echoed this view on the back of her experiences at the recent IOC Athletes Forum in Lausanne (SUI).

Harmonising Olympic equestrian sport with a cap of three team members across the three disciplines was one of the key proposals in today's session, with the by-product of increasing the number of flags at the Olympic Games. Separating individual and team events and removing team drop scores were also put forward.

Under the new proposals, Dressage would have a total of 15 teams and 15 individual athletes, using heats to qualify the top 18 for the individual final, maximising the emotion and drama of the sport.

In Jumping, there would be 20 teams and 15 individuals, with a jump-off for first place in both individual and team. If team gold is decided by a jump-off, all three team horse/rider combinations would compete against the clock but only the best score would count. Other proposed changes would see the team Jumping mirroring the current successful FEI Nations Cup format, with just the top 10 teams starting with zero penalties in the medal-decider final.

In Eventing, the Dressage phase would be condensed to a single day using a shorter test, and the traditional format of Dressage, Cross Country and Jumping would be kept to retain the essence of the discipline, protect horse welfare and ensure reliable immediate results.

The individual Jumping phase would be used as the qualifier for the top six or seven teams to go through to the team final, with the potential of having all three team members in the arena together, jumping one after another, so that a team result would be instantly available.

Following input from Open Forums at this year's Pan American Games, the Longines FEI European Eventing Championships and the Asia-Pacific qualifier for the Rio 2016 Olympic Games in Boekelo (NED), it was suggested that an alternative name, such as "Equestrian Triathlon" could improve understanding of the sport for a mainstream audience.

The proposals generated healthy debate amongst the National Federation representatives.

The FEI will present more detailed format change proposals based on feedback from today's session at the FEI Sports Forum 2016 in Lausanne (SUI) on 4-5 April. New formats will then be voted on at the FEI General Assembly 2016, before being submitted to the IOC before its Executive Board meeting in early 2017.