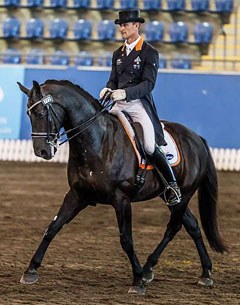 After a weekend of consistent performances at the 2015 Australian Dressage Championships, Brett Parbery has been declared the Australian Grand Prix Champion for the third time in his career. Combining with the Australian-bred black gelding DP Weltmieser, Parbery won Friday’s Grand Prix, placed second in Saturday’s Grand Prix Freestyle and ended the weekend by winning the Grand Prix Special.

It is only the third time that DP Weltmieser has stepped out in the Grand Prix Special and the score of 69.784% secured him his third win in as many starts. It was the perfect end to a successful weekend for Parbery with Weltmieser recording personal best scores across the Grand Prix and Grand Prix Freestyle.

Parbery has previously won the Australian Grand Prix Champion title with Whisper (2006) and Victory Salute (2009), who went on to represent Australia at the World Equestrian Games. He said Weltmeiser shared an interesting synergy with Victory Salute.

"Both horses were owned by the breeder. Carolyn Lieutenant bred Vicory Salute and owned him all the way through and the Duddy's bred and own Weltmeiser. I think that's a really good thing for breeders out there," said Parbery.  "(Weltmieser) is just getting better and better. And I'm feeling things in the warm-up, even today on the third day of the show, that I didn't think was in there. He's finding more strength and more confidence and only gettting better. I think he can be very good," he said.

The final day of competition also crowed the Novice and Elementary Champions and Elloise Devlin made it three from three in this grade when she won the IRT FEI Young Rider Freestyle CDI-Y with a score of 67.575%. Her results saw her awarded the Dietmar Specht Memorial Trophy which is awarded to a rider under 30 who has the best two placings in official competitions from Elementary to Grand Prix (including Freestyles and the Grand Prix Special).