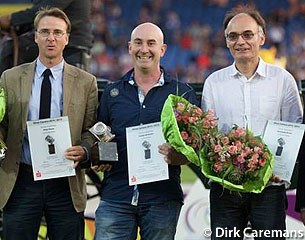 Three photos out of 114 submissions got selected for the 2015 Silver Camera Award.

Leanjo de Koster, who runs the equestrian photography business Digishots in The Netherlands and who is a contributor to Eurodressage, won the award and received it in special ceremony in the Aachen main stadium at the 2015 European Championships on Saturday evening 22 August 2015.  French photographer Christophe Bricot finished second, Brit Peter Nixon was third. The winner gets a silver camera trophy and a 2,500 euro cash prize, the runner up gets 1,000 euro and the third placegetter 500 euro.