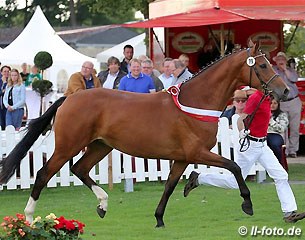 Eight mares in total were selected for the champion's ring and the committee placed Vienna at the top. The bay mare is bred and owned by Jürgen Bunge and is by Vitalis out of the Verband premium mare Fatima (by Florestan).

The selection committee assessing the mares, of which the majority is 3 years of age and only a few 4-year olds, includes Wolfgang Luge, Susanne Schmitt-Rimkus, Wilhelm Holkenbrink, Wilken Treu and Wilhelm Weerda.