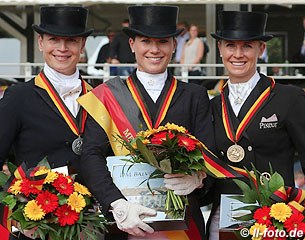 Kristina Sprehe and her Hanoverian licensed stallion Desperados (by De Niro x Wolkenstein II) secured their second, consecutive national title at the 2015 German Dressage Championships in Balve, Germany, on Saturday 13 June 2015. By winning the Grand Prix and the Special with strong eighty percentage scores, Sprehe proved herself to be the country's dominating rider while the other top horses -- Bella Rose, Totilas -- are crawling out of sick bay.

The German press lauds Sprehe and Desperados' top form condition in Balve with an improved regularity in the passage and a better contact with the bridle showing. After scoring 81.300% on Friday, Sprehe improved to a 82.490% in the Grand Prix Special for the gold medal.

"I have improved the contact. We have been working on gymnasticizing him," Sprehe told German magazine ST. GEORG. "I keep him shorter so that his hindleg comes more under." Sprehe has been working together with German team trainer Monica Theodorescu since moving away from coach Jurgen Koschel. The judge at C was also full of praise. "Desperados was not always so happy in the mouth in the past, but today the contact had improved strongly and he was good in the mouth. One got the feeling that he really was willing to take on the aids forwards."

Isabell Werth captured the silver medal aboard Madeleine Winter-Schulze's Don Johnson (by Don Frederico x Warkant), who did his fourth major show in five weeks time. In the Grand Prix Special the temperamental bay was steady in the bridle, had a small hiccup before the first piaffe but recovered quickly. The pair scored 78.160% in the Grand Prix and 78.000% in the Special to finish second twice.

"He really continued to work, which I thought was very nice of him," Werth commented. "He is not a controlled risk to ride," she joked. "He has become an athlete. His body has changed, I can ride him the test and no longer have to react to each thing that comes to his mind." 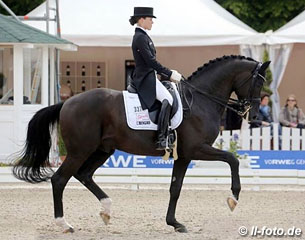 The bronze medal went to Jessica von Bredow-Werndl on Swiss judge Beatrice Burchler-Keller's Dutch warmblood stallion Unee BB (by Gribaldi). The 29-year old rider is having a career highlight year with the stallion, finishing third at the 2015 World Cup Finals and now third in Balve. Jessica and Unee stood out with good passage work and uphill two tempi changes. One change was short behind in the one tempi's

"Unee BB had more power today," stated von Bredow, who won a kur bronze medal at the 2014 Nationals in Balve.

The surprise performer of the show is Hubertus Schmidt on the 12-year old Trakehner licensed stallion Imperio (by Connery x Balfour). The bay stallion, who was out of business for two years due to an injury, has been making a strong come back in 2015 and is very much liked by the judges. The gorgeous stallion produced an almost faultfree test but he stalled in the final piaffe at X.  The stallion scored high on his extended trots and passage transitions as well as in walk. There was a mistake in the rhythm in the final trot extensions. The pair scored 76.24% to finish fourth.

Schmidt and Imperio's shooting star performance in Balve is putting additional pressure on Anabel Balkenhol and Dablino, who are also serious contenders for a German team spot for the 2015 Europeans this summer. Balkenhol finished fourth in the Grand Prix (76.040%) and fifth in the Special (75.020%).

Werth stated that she drove back home from Balve to continue training Bella Rose as she wants to get her mare on point for next month. Theodorescu confessed that although Don Johnson is proving strong form, she prefers to have Bella Rose on the team. "She's one of the best horses in the world. Of course I want her on the team," said Monica.