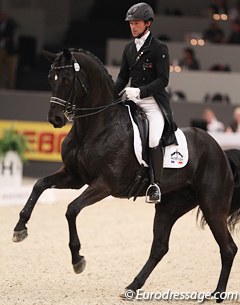 French WEG Team horse Noble Dream has been put on a competition break after a disappointing results at last weekend's second French premier league competition in Jardy on 11 April 2015. Boblet cites ovarian issues as the reason for the mare's inconsistency.

Marc Boblet and the Dallara family's Noble Dream (by Caprimond x Donnerhall) were entered for the elite Grand Prix, a class with 38 combinations including all of France's best Grand Prix riders.  Boblet's score on Noble Dream is not listed on the results page.

Boblet has been struggling to ride the piaffe on the sensitive black mare and was hoping to fix the issues by reverting back to national level competition. The rider cites the mare's ovarian problems of the past few months as reason for her tense and inconsistent performance at shows.

"The absence of daily routine, the travelling, the change of location and the performances in the test increase the hormonal problems," Boblet told Grand Prix Replay. "Her ovaries are producing follicles without her ovulating. She's always overheated and it's her over-active and over-sized ovaries that put pressure on her back. That's why we need to find a veterinary solution in the next few days."

Noble Dream has therefore been withdrawn from competition for several months. The 2014 CDI-W Lyon in October was her last show of the autumn before returning to the ring at the 2015 CDI Addington at the end of March, where the duo finished second twice in the big tour.

"A few weeks away from the competition ring will not affect her competitiveness. At age 13 she knows her job and when she's in full form, she will return to her normal level of pezzazz, which impresses us all," said Boblet.