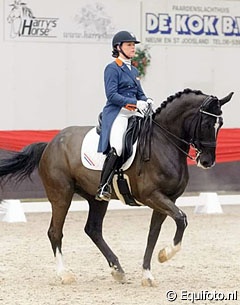 Dutch team rider Danielle Heijkoop will be making her CDI debut on a new Grand Prix horse. Heijkoop will be presenting the 11-year old Dutch warmblood mare Zaffier at the World Cup Qualifier in Gothenburg, Sweden, on 25 February - 1 March 2015.

Zaffier is bred by Peter Stevens and was acquired as a 3-year old bij Carlijn de Boer. She trained and competed the horse up to Grand Prix level but gave the ride to Heijkoop a couple of months ago in order for the mare to reach her full potential.

On 18 January 2015, Heijkoop made her first public outing with the new ride at the national show in Nieuw en St. Joosland, where she scored 67.77% in the Grand Prix and obtained the necessary criterium to compete internationally.

Zaffier is by Special D out of the Dutch harness horse Orentina (by Renovo x Proloog) and has that typical Dutch cross bred look.

"We are very proud of Zaffier, said the mare's ecstatic breeder Peter Stevens. "We believe that it's not so crazy to cross a harness horse with a dressage horse. We wanted to breed for sport and rideability. We got expression, self carriage, hind leg usage, ground cover, willingness to go and of course a very good character. Zaffier has got it all."