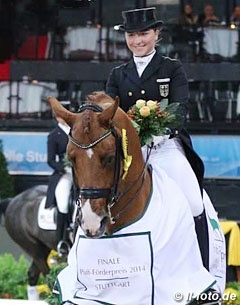 In a close race to claim the title of German Under 25 Champion by winning the 2014 Piaff Forderpreis Finals, Charlott-Maria Schürmann surfaced at the top in the Grand Prix finals class held during the 2014 CDI-W Stuttgart on 20 - 23 November 2014. Last year's winner Nadine Husenbeth was now the runner-up, followed by Sanneke Rothenberger.

“In the Grand Prix we had a mistake in the zig-zag but that was my fault," Charlott Maria confessed. "Aside from that, Burlington has a lovely walk, and we got a "9" for the extended walk and canter. It was also the first time we got an 8 for a canter pirouette, and I was so happy about that because i don't really like to ride pirouettes.” Still lacking a little self-confidence in the Grand Prix test, the routinier former German Young Rider team member acknowledged she needs more mileage at that level but with her horse it is a pleasure!

“Burlington is the best horse I've ever had. I got him when he was six years old. We really didn't expect that he would develop so well," she said. "I trained five years with Burlington at Oliver Oelrichs' and after the Young Rider Tour he said " Charlott we need a professional for the piaffe and passage”. He asked Klaus Balkenhol if he could help us and in the beginning we trained once a week with Klaus but now Burlington has been there for the past year and we learn every day a bit more.”

A stallion who loves his bananas, Burlington has his full brother, the 3-year old Burlington II, as next door neighbour. Charlott Maria hopes  to finish her University degree next year and start Burlington in the Big Grand Prix.

Her second year at Grand Prix level, Nadine Husenbeth was back to defend her title after winning the Piaff-Forderpreis in 2013. Although finishing in the runner-up position, Nadine was very happy with 14-year old mare Florida (by Fidermark x Grosso Z). 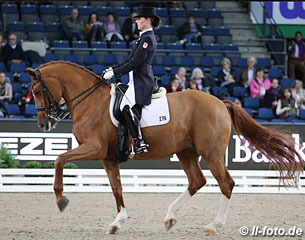 “I think it was a really tight race between the first and the second place this year,” said Nadine. “I was very pleased with my trot tour  and felt we had also some highlights in the piaffe and passage. I have to say that riding in Stuttgart was an absolutely fantastic experience again,  fuelled by a very responsive audience.”

Over the past year Florida and her rider have both gained confidence in the Grand Prix movements.

“She really knows that she is my star and she is a real diva," Nadine added. "She has a strong character which makes her unique and this is why I love her so much. At competitions she is relaxed and fights for me.”

Trained by parents Klaus and Britta Husenbeth at the family's private stable, Nadine knows she is living every girl's dream with her horses in front of her bedroom window.

“For 2015 I want to tie in with this year and I also want to get some experience with my young horses," she explained. "I have got a 7-year old gelding by Rubin Royal x Wordly who was placed and won at several young horse tests at M Level.  I hope I can qualify him for the Nürnberger Burgpokal next year. I also work with a 4-year old gelding by San Amour x Bonheur, who is a horse with great potential and I am very happy to train him. Next year I would like to qualify him for the Bundeschampionate in Warendorf.”

Third place getters, Sanneke Rothenberger and her 15-year old Hanoverian mare Wolke Sieben (by Wolkenstein II x Hitchcock) were also very happy with their results in Stuttgart, particularly as Sanneke noticed her mare has become stronger in the Grand Prix.

“Every show has unique challenges. In Stuttgart it was the long outside way to get to the main arena. Thus, I was very happy that the weather was not too cold and it did not rain,” said Sanneke. 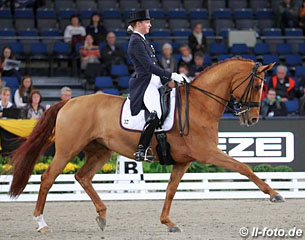 Particularly happy with the piaffe, Sanneke could really feel the horse starting to “sit” and having fun doing the more collected movements.

“During my second test she also executed some really great pirouettes, but that is a thing she always loves to do," she added.

Sanneke hopes to improve on the accuracy of her tests, so that faults such as miscounting in the zig-zags do not have to happen. The chestnut mare is a real prima donna in the barn but always gives the rider her best under saddle.

“With this mare you can always depend on her to do her best, no matter if it is the Young Rider Europeans in Bern or now the Piaff Förderpreis Finals in Stuttgart," said Sanneke. "In the stables she has her own rhythm. She wants to be one of the first to be ridden, otherwise she will show you that she is not happy to wait.  However, do not try to ride her at 9:00 am, because then she must have her beauty sleep. Her mood is always much better after she has rested.”

Training at home with her mum Gonnelien Rothenberger-Gordijn and on the weekends with her dad Sven, Sanneke is wishing for a 2015 full of wonderful horse shows in which she can ride at Grand Prix level, while finishing her Masters degree in Real Estate.