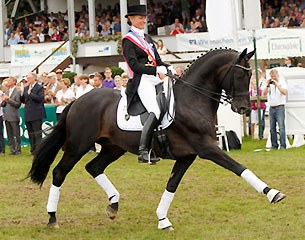 King Arthur is bred by J. von Gierke in Langwedel and owned by Petra Wilm, the president of the Trakehner society. He stands at stud at Wilm's Gestut Tasdorf.

The refined black stallion is by Buddenbrock out of Konsula (by Consul x Patras). As a young horse he competed at the 2004 World Young Horse Championships in Verden, Germany, and has been trained all the way up to Grand Prix. He is regional champion in Schleswig-Holstein.

Under Wilm King Arthur has competed at a few international dressage shows at Grand Prix level between 2008 and 2011 with moderate results. His international high score is 68.700% in the Kur and 67.278% in a classic Grand Prix.