Champ of Class Sold to Germany 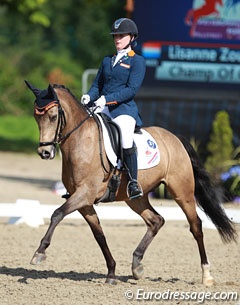 Lisanne Zoutendijk ended her pony career on Champ of Class with team bronze, individual test silver and kur bronze at the 2014 European Pony Championships an the 2014 Dutch Outdoor Pony Champion's title. The pony came for sale right after the Dutch nationals and has now been sold to the Pistner family.

The 10-year old German Riding Pony gelding Champ of Class (by Champion de Luxe x Dornik B) was discovered by Coby van Baalen and Tim Coomans at the 2009 Westfalian Elite Auction, where the trainers' duo bought the buckskin for 11,000 euro.

Champ of Class's new rider Valentina Pistner has been riding ponies Josephine and Nagano's Son as well as her brother Constantin's Lordy. She will be training her new pony at Coby van Baalen's yard in The Netherlands.

"The pony has always been with Coby and we are not planning to change anything," Valentina's mom Nicole Pistner told Eurodressage, "especially because they are doing an excellent job."